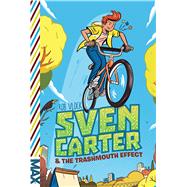 Sven Carter—part boy, part robot—is on a mission to save himself from destroying the human race in this fun and funny MAX novel!

Ever since Sven Carter was caught eating a moldy blueberry muffin under the gym bleachers, earning himself the nickname “Trashmouth,” he’s been his school’s biggest outcast.

But he soon discovers that having a lame nickname is the least of his worries. After a horrible wipeout involving a bike, a ramp, and a chocolate-anchovy-garlic-mint wedding cake (don’t ask), his left arm just…well, it falls off. But before Sven can even remove the stray anchovy from his nostril, his arm drags itself across the pavement and reattaches itself to his shoulder!

That’s when Sven learns he’s not a kid at all, but a “Tick”—a high-tech synthetic humanoid created as part of an elaborate plot to destroy the human race. Now Sven, his best friend Will, and his tough-as-nails classmate Alicia must face down a host of horrors—killer clown-snakes, a giant Chihuahua, the stomach-churning Barf Bus, murderous roast chickens, and even Sven’s own brain—to save humanity from permanent extinction.
Rob Vlock writes fun, funny, fast-paced kids’ books that are perfect for reluctant readers. When he’s not writing, you can usually find him somewhere in the greater Boston area trying to make his trumpet sound like something other than a dying goose. It’s a work in progress.