It Takes a Candidate: Why Women Don't Run for Office 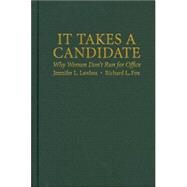