Tales from the Seattle Seahawks Sideline 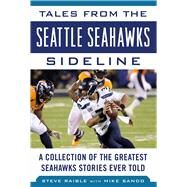 From the hilarious to the surreal, from inside the huddle to inside the broadcast booth, twenty-eight-year Seattle Seahawks veteran Steve Raible takes fans to places they never knew existed. In this newly revised edition of Tales from the Seattle Seahawks Sideline, fans are offered an inside look at life in the locker room and on the sidelines of one of the NFL’s most beloved franchises. Readers will have the chance to laugh along as Jack Patera trades Andre Hines to the Dolphins after warning Don Shula that a worse offensive lineman never existed, to marvel as Raiders legend John Matuszak becomes Seattle’s offensive coordinator during the final minutes of the Seahawks’ blowout win, to come along with Steve Largent as the Hall of Famer obliterates Broncos safety Mike Harden in the ultimate payback, and so much more.

This book brings all the Seahawks’ greatest players to life from Jim Zorn, to Dave Krieg, Kenny Easley, Curt Warner, Brian Bosworth, Cortez Kennedy, Warren Moon, Mike Holmgren, Ricky Watters, Chad Brown, Shaun Alexander, and more. This insider’s account also explores the lesser known characters whose stories inspire laughter, tears, and lasting lessons. Tales from the Seattle Seahawks Sideline is all about the people, proving through vivid anecdotes why the Seahawks are one of the most storied franchises in today’s NFL.
Steve Raible is an original Seahawk whose six-year playing career marked the beginning of his association with the organization. Now entering his thirty-fifth year as the team’s radio color analyst, he is a Seahawks lifer whose reach extends beyond the locker room. An Emmy Award–winning news anchor for KIRO 7, the CBS affiliate in Seattle, Raible also lends his time, talent, and high profile to numerous charities. He owns a stake in Chandler Reach Vineyards, a winery in the Yakima Valley.
Mike Sando has covered the Seahawks for the Tacoma News Tribune since 1998. He contributes to Pro Football Weekly and USA Today Sports Weekly as well as the “Seahawks Round Table” on Seattle’s KJR-AM radio. He covered various sports, notably Washington State University football, during a seven-year run in Spokane that preceded his arrival in Tacoma.