The Taming of Chance 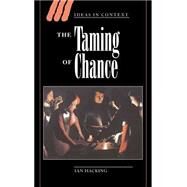 In this important new study Ian Hacking continues the enquiry into the origins and development of certain characteristic modes of contemporary thought undertaken in such previous works as the best-selling The Emergence of Probability. Professor Hacking shows how by the late nineteenth century it became possible to think of statistical patterns as explanatory in themselves, and to regard the world as not necessarily deterministic in character. In the same period the idea of human nature was displaced by a model of normal people with laws of dispersion. These two parallel transformations fed into each other, so that chance made the world seem less capricious: it was legitimated because it brought order out of chaos. Professor Hacking argues that these developments have led to a new style of scientific reasoning gaining its hold upon us. The greater the level of indeterminism in our conception of the world and of people, the more we expect control and intervention in our lives, and the less we expect freedom. Combining detailed scientific historical research with characteristic philosophic breadth and verve, The Taming of Chance brings out the relations between philosophy, the physical sciences, mathematics and the development of social institutions, and provides a unique and authoritative analysis of the 'probabilisation' of the western world.
What is included with this book?