The Taste of Ashes The Afterlife of Totalitarianism in Eastern Europe 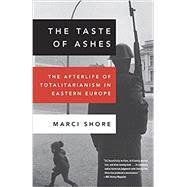 A shimmering literary examination of the ghost of communism, a haunting presence of Europe's past

Oskar has just killed himself. After waiting a quarter century, he returned to Prague only to find it was no longer his home. With his memorial service, Yale historian and prize-winning author Marci Shore leads us gently into the post-totalitarian world. We meet a professor of literature who as a child played chess with the extortionist who had come to deliver him to the Gestapo and an elderly Trotskyite whose deformed finger is a memento of seventeen years in the Soviet gulag. Parents who had denounced their teenage dissident daughter to the communist secret police plead for understanding. For all of these people, the fall of Communism has not ended history but rather summoned the past: rebellion in 1968, Stalinism, the Second World War, the Holocaust. The revolutions of 1989 opened the archives, illuminating the tragedy of twentieth-century Eastern Europe: there were moments in which no decisions were innocent, in which all possible choices caused suffering.
As the author reads pages in the lives of others, she reveals the intertwining of the personal and the political, of love and cruelty, of intimacy and betrayal. The result is a lyrical, touching, and sometimes heartbreaking portrayal of how history moves and what history means.
MARCI SHORE, an associate professor of intellectual history at Yale, has spent much of her adult life in central and eastern Europe.  She is the author of Caviar and Ashes: A Warsaw Generation's Life and Death in Marxism, which won eight prizes, including a National Jewish Book Award.  She is also the translator of Michał Głowiński's Holocaust memoir The Black Seasons.