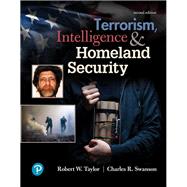 Terrorism, Intelligence and Homeland Security draws on current research to introduce you to domestic and foreign terrorism and international responses. It takes a balanced approach to exploring national challenges, including securing the country while safeguarding civil and personal liberties. Simultaneously historical and contemporary, the text examines the interplay of terrorism, intelligence and homeland security through the lens of key people, ideas, organizations and movements.

The text breaks down key issues into 4 sections: domestic and foreign threats in terms of history, geography, culture and religion; terrorist groups, their organization and their critical processes; US vulnerabilities to terrorism; and government agencies tasked with preventing terrorism.

The 2nd Edition brings new attention to the Islamic State, the US Department of Homeland Security and emergency management. New boxes and enhanced resources enrich the learning experience.

Robert W. Taylor is currently a tenured full Professor in the Department of Criminology and Criminal Justice at The University of Texas at Dallas. The Department was recently ranked fifth in the world in academic excellence based on the strength of its PhD program. Previous to this position, he was the Director of the Executive Masters in Justice Administration and Leadership Program and the former program Head for the Public Affairs Program at UT-Dallas. Both are academic programs integrating the traditions of management, governmental affairs, policy analysis, and decision science in the public sector. The Public Affairs Program hosted one of the largest graduate degree programs on campus, including Doctoral (PhD) and Master’s Degrees in Public Affairs and Public Administration.

From January 2008 through 2010, Dr. Taylor was the Executive Director of the W.W. Caruth Jr. Police Institute at Dallas (CPI). The Institute was established through a $9.5 million grant from the Communities Foundation of Texas. Dr. Taylor was a principal party to the development of the Institute and was appointed the founding director by the University of North Texas System. The primary mission of the Institute is to provide direction and coordination of major training and research projects for the Dallas Police Department. The Institute represents a national “think tank” on policing strategies focused on major urban cities in the United States. He remains a “Scholar-in-Residence” at the Institute. From 1996 to 2008, Dr. Taylor was professor and chair of the Department of Criminal Justice at the University of North Texas. He served in this capacity for thirteen years, and under his direction the Department gained national prominence, especially with the establishment of the Caruth Police Institute.

In 1995, Dr. Taylor took a leave of absence from university administration and teaching to join Emergency Resources International, Inc., the parent company of the famed “Red Adair” firefighters. His duties as Senior Vice-President, Crisis Management Division, included liaison with foreign governments and authorities, extensive contract negotiations, and the strategic development of a worldwide communication and information system. Dr. Taylor’s major project was acting as team leader on the largest oil spill in history (3 million barrels), located in the remote Nenets District of Russia, over 200 miles north of the Arctic Circle.

For the past forty years, Dr. Taylor has studied criminal justice administration and specifically police responses to crime and terrorism, focusing on issues in the Middle East. He has traveled extensively throughout the Middle East, meeting several heads of state in that region. He has acted as a consultant to numerous federal, state, and local agencies, and since September 11, 2001, Dr. Taylor has been a consultant to the U.S. Department of Justice working with the Institute for Intergovernmental Research (IIR) as a lead instructor in the State and Local Anti-Terrorism Training Program (SLATT). Dr. Taylor has also worked extensively throughout the Middle East, especially in the country of Turkey. He has been an instructor for the U.S. Department of State, Anti-Terrorism Assistance (ATA) Program (2001—2006) and taught internationally in the Executive Seminar on Cyber Terrorism presented to executives of foreign governments. Dr. Taylor holds appropriate top secret national security clearances through the JPASS system (archived).

Dr. Taylor has authored or coauthored over 200 articles, books, and manuscripts. Most of his publications focus on police administration and management, police procedures, international and domestic terrorism, drug trafficking, and criminal justice policy. His articles appear in numerous journals, including Defense Analysis (University of Oxford, England Press), the ANNALS (American Academy of Political and Social Sciences), Police Quarterly, Crime and Delinquency, and the Police Chief (International Association of Chiefs of Police). Dr. Taylor is coauthor of two leading textbooks, Police Administration: Structures, Processes, and Behavior (Upper Saddle River, NJ: Pearson Publishing, 2017), currently in its 9th edition, and Criminal Investigation (New York: McGraw-Hill, 2018), currently in its 12th edition. These texts are used in over 500 universities, colleges, and police departments throughout the United States. He is also the senior author of Juvenile Justice: Policies, Practices, and Programs (McGraw-Hill, 2014) in its 4th edition, Cyber Crime and Cyber Terrorism (Pearson, 2018) in its 4th edition, and Police Patrol Allocation and Deployment (Pearson, 2011).

Dr. Taylor has an extensive background in academic and professional criminal justice, having taught at four major universities and serving as a sworn police officer and major crimes detective (lateral rank of sergeant) in Portland, Oregon, for over six years.

In 1984, Dr. Taylor was appointed as a Research Fellow at the International Center for the Study of Violence at the University of South Florida, Tampa, Florida, conducting various studies involving international and domestic terrorism, police training and management, public violence and homicide, computerized mapping, and international drug trafficking. He continues to conduct research in these areas and is the recipient of numerous grants and contracts (over $18 million in funded projects). His latest work is concentrated in four areas: (1) quality improvement in police agencies through advanced leadership and management practices; (2) international terrorism, especially Middle-Eastern groups, and the spread of radical Islam; (3) evaluation of community policing, CompStat, and intelligence-led policing strategies in the United States; and (4) intelligence analysis, fusion centers, and decision making, particularly during protracted conflict or crisis situations.

In 2004, the International Justice Mission in Washington, D.C., asked Dr. Taylor to assist in the training of the Cambodian National Police on child sex slavery and human trafficking as part of a large project funded through the U.S. Department of State ($1 million). His interest and research in this area have led to a leadership role in designing and developing training efforts in the United States aimed at raising awareness of the human trafficking tragedy for American law enforcement officers, funded in part through the U.S. Department of Justice. Dr. Taylor focuses on the nexus between human trafficking, drug trafficking, and the financing of terrorist incidents internationally and domestically. He continues this important work as a guest lecturer, speaking at conferences internationally on these subjects.

In 2003, Dr. Taylor was awarded the University of North Texas, Regent’s Lecture Award for his work in the Middle East. In March 2008, the Academy of Criminal Justice Sciences presented Dr. Taylor with the prestigious O.W. Wilson Award “in recognition of his outstanding contribution to police education, research and practice.”

Dr. Taylor has been a consultant to the U.S. Army, the U.S. Marine Corps, the U.S. Department of Homeland Security, the U.S. Department of Treasury, Federal Law Enforcement Training Center, the U.S. Secret Service, the Bureau of Alcohol, Tobacco, and Firearms, the U.S. Department of Justice, the Federal Bureau of Investigation, the Drug Enforcement Administration, the Police Foundation, the Police Executive Research Forum (PERF), the International Association of Chiefs of Police (IACP), and numerous state and local municipalities and private corporations. He has also conducted significant training in the United States protectorates of the U.S. Virgin Islands, Guam, and Saipan, and the countries of Canada, England, France, Switzerland, Thailand, Cambodia, Barbados, Northern Cyprus, Bahrain, Venezuela, Russia, Finland, United Arab Emirates, Kenya, Singapore, and Turkey. He is an active member of the Academy of Criminal Justice Sciences (elected National Chair of the ACJS Police Section — 2002), the American Society for Public Administration, and the American Society of Criminology.

Charles R. “Dr. Swanson” Swanson enlisted in the Marine Corps when he was 17 years old, subsequently working as Patrol Officer and Detective with the Tampa Police Department. He joined Florida Governor Claude Kirk’s staff as a Senior Police Planner and later as Deputy Director of the Governor’s Council on Law Enforcement and Criminal Justice. Dr. Swanson taught criminal justice courses at East Carolina University before becoming a faculty member at the Institute of Government (IOG) at the University of Georgia. Faculty members in the IOG are charged with carrying out programs of research, training, and technical assistance for Georgia units of state and local government. Dr. Swanson specialized in reorganization of police departments to achieve enhanced performance.

For much of his 29 years in the IOG, Dr. Swanson focused on three efforts:

Dr. Swanson advanced through the administrative ranks of the IOG, Program Director, Division Director, Deputy Director, and retired as the Acting Director. His home is in Athens, Georgia, a musical hotspot with several internationally known bands residing there. One of his more unusual consulting jobs was advising a major touring band on how to recover a member’s stolen guitar.

Dr. Swanson has received an array of recognitions, including a Distinguished Service Award and the Walter Bernard Hill Award from the University of Georgia, commendations from the governors of three states for contributions to public service, the O.W. Wilson Award for Distinguished Scholarship, a Service Award from the Georgia Association of Chiefs of Police, as well as receiving their First Honorary Chief of Police Award for service to that organization. As a consultant, Dr. Swanson has worked with police agencies as far apart as the Elizabeth, New Jersey, Police Department, the Dallas Police Department, and the Multnomah County (Oregon) Department of Public Safety. He has also taught abroad in the Shanghai Municipal Institute. In 2016, Dr. Swanson was honored as a Distinguished Alumni of Florida State University’s College of Criminology and Criminal Justice.

He received bachelor and master’s degrees in criminology from Florida State University and a PhD in Political Science, with a concentration in public administration, from the University of Georgia.