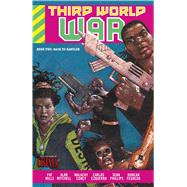 “In the harsh light of the third decade of this century it seems everything that made the comics work, including the bloody single-mindedness, shines ever brighter.” – Tom Shapira, The Comics Journal

After her eye-opening experiences of corporate interference in Central America, Eve returns to Britain with a renewed political drive and determination to fight for what she believes in.
Written in the late 80s by Pat Mills (Nemesis the Warlock, Slaine), this incendiary second volume of the ground-breaking political comic not only contains contributions by legend Carlos Ezquerra (Judge Dredd,Preacher) but also introduces international comics stars Sean Phillips (Criminal, Kill or Be Killed) and Duncan Fegredo (Hellboy, Kid Eternity).
Pat Mills is the creator and first editor of 2000 AD. For the Galaxy’s Greatest Comic, he is the writer and co-creator of ABC Warriors, Finn, Flesh, Nemesis the Warlock, Sláine, M.A.C.H 1, Harlem Heroes, Savage, Defoe and Greysuit. He also developed Judge Dredd and wrote one of the early Dredd serials - The Cursed Earth. He wrote Third World War for Crisis!, a politically-charged spin-off from 2000 AD, and Black Siddha for the Judge Dredd Megazine.