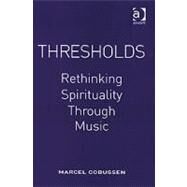 In Thresholds Marcel Cobussen rethinks the relationship between music and spirituality. The point of departure is the current movement within contemporary classical music known as New Spiritual Music, with as its main representatives Arvo Pärt, John Tavener, and Giya Kancheli. In almost all respects, the musical principles of the new spiritual music seem to be diametrically opposed to those of modernism: repetition and rest versus development and progress, tradition and familiarity versus innovation and experiment, communication versus individualism and conceptualism, tonality versus atonality, and so on. As such, this movement is often considered as part of the much larger complex called postmodernism.
What is included with this book?