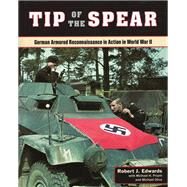 During World War II, German armored reconnaissance laid the groundwork--often through small-unit actions--for the stunning tank and infantry operations that made the German military famous. Robert Edwards's follow-up to Scouts Out, the first extensive treatment of the subject in English, focuses on the battles and personalities found in ranks of the Waffen-SS, Luftwaffe, and other divisions.
Robert Edwards, a retired U.S. Army armor officer who led a scout platoon, has taught at West Point and is the author of Scouts Out (978-0-9117-1311-5). He has also translated numerous books from German into English. He lives in Navarre, Florida.
What is included with this book?