Tragedy and the Idea of Modernity 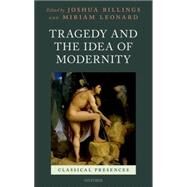 From around 1800, particularly in Germany, Greek tragedy has been privileged in popular and scholarly discourse for its relation to apparently timeless metaphysical, existential, ethical, aesthetic, and psychological questions. As a major concern of modern philosophy, it has fascinated thinkers including Hegel, Kierkegaard, Nietzsche, Freud, and Heidegger. Such theories have arguably had a more profound influence on modern understanding of the genre than works of classical scholarship or theatrical performances.

Tragedy and the Idea of Modernity considers this tradition of philosophy in relation to the ancient Greek works themselves, and mediates between the concerns of classicists and those of intellectual historians and philosophers. The volume is organized into sections treating issues of poetics, politics and culture, and canonicity, and contributions by an interdisciplinary range of scholars consider themes of catharsis, the sublime, politics, and reconciliation, spanning 2,500 years of literature and philosophy. Although firmly anchored in the classical tradition, the volume suggests that the tradition of philosophical thought concerning tragedy has a major place in understandings both of ancient tragedy and of modernity itself.

Joshua Billings is Assistant Professor of Classics and Humanities at Yale University.

Miriam Leonard is Professor of Greek Literature and its Reception at University College London.

Acknowledgements
List of Contributors
Introduction, Joshua Billings and Miriam Leonard
Part 1: Tragic Poetics
1. Jacob Bernays and the Catharsis of Modernity, James I. Porter
2. The Aesthetics of Tragedy: Romantic Perspectives, Christoph Menke
3. Paradoxon: On the Sublimity of Tragedy in Holderlin and Some Contemporaries, Ian Balfour
4. Tragedy and Trauerspiel: Too Alike?, Samuel Weber
5. Leben und Gluck: Modernity and Tragedy in Walter Benjamin, Holderlin, and Sophocles, Andrew Benjamin
Part 2: Tragic Cultures
6. Tragedy With and Without Religion: Hegelian Thoughts, Terry Pinkard
7. The (Operatic) Culture: Notes on a Theme in Kierkegaard, Hebbel, and Wagner, Rudiger Gorner
8. Heidigger's Antigone: Ethics and Politics, Katie Fleming
9. Carl Schmitt: Tragedy and the Intrusion of History, Miriam Leonard
10. The Tragic Voice of Pascal Quignard, John Hamilton
Part 3: Tragic Canons
11. The Ends of Tragedy: Schelling, Hegel, and Oedipus, Simon Goldhill
12. The Tragedy of Misrecognition: The Desire for a Catholic Shakespeare and Hegel's Hamlet, Simon Critchley
13. Margins of Genre: Walter Benjamin and the Idea of Tragedy, Joshua Billings
14. Williams on Nietzsche on the Greeks, Robert B. Pippin
Tragedy and Modernity: Closing Thoughts, Michael Silk
Appendix: Translation of Part II of Jakob Bernays 'Cartharsis', James I. Porter
Index
What is included with this book?