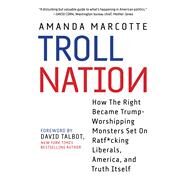 The election of Donald Trump in 2016, like most of his campaign, came as a shock to many Americans. How could a man so lacking in capacity, so void of any intellectual heft, become the president of the United States? How did Trump, a man with no detectable personal qualities outside of resentment and the will to dominate, appeal to millions of Americans and win the highest office in the land? The American right has spent decades turning away from reasoned discourse toward a rhetoric of pure resentment—it’s this shift that laid the groundwork for Trump’s ascendency.

In Troll Nation, journalist Amanda Marcotte outlines how Trump was the inevitable result of American conservatism’s degradation into an ideology of blind resentment. For years now, the purpose of right wing media, particularly Fox News, has not been to argue for traditional conservative ideals, such as small government or even family values, so much as to stoke bitterness and paranoia in its audience. Traditionalist white people have lost control over the culture, and they know it, and the only option they feel they have left is to rage at a broad swath of supposed enemies ? journalists, activists, feminists, city dwellers, college professors ? that they blame for stealing “their” country from them.

Conservative pundits, politicians, and activists have abandoned any hope of winning the argument through reasoned discourse, and instead have adopted a series of bad faith claims, conspiracy theories, and culture war hysterics. Decades of these antics created a conservative voting base that was ready to elect a mindless bully like Donald Trump.
Amanda Marcotte is a Senior Political Writer for Salon. Before this, she spent a decade as a freelance journalist, writing regularly for Slate, the Rolling Stone, the Daily Beast, USA Today, Talking Points Memo, and the Los Angeles Times. Marcotte’s expertise is in covering the American right, a beat she was drawn to after growing up in a conservative Texas household with Fox News and Rush Limbaugh-loving parents. She got her start covering reproductive rights, which further familiarized her with the organizing and rhetorical strategies of the Christian right. Since then, she’s expanded her reporting on right wing politics, covering everything from climate change denialism to the activities of the gun lobby.

David Talbot is the New York Times bestselling author of Brothers: The Hidden History of the Kennedy Years and The Devil’s Chessboard. He is the founder and former editor-in-chief of Salon and has written for the New Yorker, Rolling Stone, and Time. He lives in San Francisco.