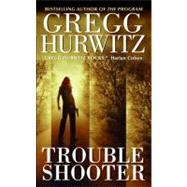 The maestro of pulse-pounding suspense delivers an explosive new white-knuckle thriller featuring deputy U.S. Marshal Tim Rackley -- a lawman driven by honor, morality, and a thirst for justice. The leader of one of the country's most violent biker gangs, Den Laurey should have been behind bars. But thanks to a daring escape on an L.A. freeway, several deputy marshals are dead and Laurey is riding free. Rackley, back on the Service's warrant squad, is in hot pursuit of the outlaw and his ruthless gang -- with a media whirlwind and the entire Los Angeles law-enforcement community driving him. Just when Laurey is within his grasp, circumstances force Rackley to let him go -- with devastating results. A few miles up the road, a sheriff's deputy is attacked: Tim's pregnant wife, Dray. Driven by guilt, Tim vows to hunt Laurey down -- a search that will lead him into a dark world of deception and lies, a world of criminals and undercover cops, drugs and mutilation. And the key to the violent puzzle lies in the discarded corpses of women -- women for whom Tim must seek justice when no one else will. With the stakes rising, Tim must unravel a horrifying secret and confront a deadly terror that reaches from the back alleys of Mexico to the poppy fields of Afghanistan ... and threatens to explode on the dark streets of L.A.
What is included with this book?

Den Laurey strained against the cuffs so his shoulders bulged under his jailhouse blues, sending ripples through the FTW tattooed above his collarbone. An amused smile, all gums at the corners, rode high on his face. In an additional security measure, the chain of his leg restraint had been knotted, narrowing the space between his ankles. Kaner sat beside him on the transport's bench seat, stooped so his head wouldn't strike the roof during freeway turbulence. Because he was too broad for his wrists to meet behind his back, Kaner's arms were secured with two sets of handcuffs linked together. A onetime sparring partner to Tyson -- in prison -- he'd snapped more than one set of cuff chains, so a second pair of restraints secured him at the forearms. Beneath a wild man's spray of black hair, a 22 tat on the back of his neck advertised his previous stint in the pen. Kaner had a broad, coarse face and prominent earlobes, fleshy tags that lay dimpled against his skull.

Den, president of the Laughing Sinners nomad chapter, and Kaner, the biker gang's national enforcer, were being driven under heavy guard directly from sentencing to San Bernardino County Jail, where they'd await Con Air transport to a federal penitentiary. They'd been convicted of the torture-killing of three members of the Cholos, in retaliation for the shooting of a Sinner. Den, renowned for his knife skills, had severed the victims' heads with surgical precision and set them in their laps. For good measure he'd removed their hearts and left them on the Cholos' clubhouse doorstep. The gesture marked another leap in the escalation between the Sinners and Cholos, a broad-ranging turf war for control over key arteries of Southern California's drug trafficking network.

Deputy U.S. Marshal Hank Mancone, a fixture behind the wheel of the transport van, was the only nonprisoner in the three-vehicle convoy not a member of the Service's Arrest Response Team. Frankie Palton in the passenger's seat, the four deputy marshals in the armored Suburban behind them, and the two in the advance vehicle five miles up the road were all part of the district's ART squad, called in for tactical strikes and high-risk transports. Mancone was a deputy as well, but given his retirement age and contentment in grousing about his narrow bailiwick, he had little interest in the ARTists aside from giving them the occasional lift.

"You can take our clothes, but you can't take our colors."

"We keep having these Hallmark moments, I might get dewy-eyed."

The radio crackled in from the chase car. Jim Denley -- Palton's partner: "Eyes up on your right. We got some more bikers coming on."

Palton looked in the sideview. Two bikers rattled past, double-parking, their mamas reclining against sissy bars and offering the deputies languorous waves. Another three bikers zipped by on the right, flying colors, filthy club logos flapping on the backs of their leather jackets.

Mancone's grip on the steering wheel eased once the whine of the Harleys faded. "What's with all the bikers?"

Kaner's three-pack-a-day voice emerged from the tangle of hair down over his face. "I'll still take it over you citizens driving around in your cages."

"Hear that, Mancone?" Palton said. "We got nothing to worry about. Just wannabes. And to think I was carrying this gun for no good reason."

Den said, "You want to get your shorts twisted over some weekend warriors, be my guest."

Two streams of bikers throttled by on either side of the van, their top rockers -- the strips of stitched leather cresting the jackets' logos -- announcing them as Cholos. Their bottom rockers showed their mother-chapter affiliation: PALMDALE. A few minutes later, a beefy biker rolled past and did a double take at the prisoners. When he lingered to gloat and flip them a middle finger, Palton raised the stock of his MP5 into view. The Cholo opened the throttle, ponytail flicking, and his bottom rocker came visible: NOMAD.

Den laughed, scratching his cheek with a swipe of his shoulder. "Good ol' Meat Marquez. Now that his nomad buddies met their untimely demise, poor spic's gotta ride all by his lonesome."

They came around a bend in the 10 and were greeted by hundreds of brake lights. As Mancone cursed and slowed to a crawl, Palton got the advance car on the air. "What's with the traffic?"

"What traffic? We sailed through."

Once traffic ground to a standstill, a biker wearing a duster pulled a few lengths ahead of them, stopping where the space between idling cars narrowed. He was low in the seat, pint-size but exuding attitude. He turned and looked back, the van reflected in the silver blade of the helmet's faceplate. The distinctive Indian logo identified the motorcycle frame's maker, but the rest of the sleek bike seemed to be custom-built. It sported a leather saddlebag on the left side, but its mate was missing on the right. The biker revved the engine, giving voice to 1,200 cubic centimeters of rage.

Jim's voice came through the radio again, and Palton replied, "Yeah, we got him. Looks to be unaffiliated -- he's not flying colors."

A Harley white-lined through the traffic jam, easing up past the right side of the Suburban and van. The helmeted rider paused a few feet back from the other biker, across the lane, idling.

Hands tensing around his weapon, Palton checked the side mirror. Jim had the stock of his MP5 against his shoulder, ready to be raised. Something was lying on the ground under the Suburban at the front left tire. Palton clicked the rear view controls, centering the object in the mirror.

Excerpted from Troubleshooter by Gregg Andrew Hurwitz
All rights reserved by the original copyright owners. Excerpts are provided for display purposes only and may not be reproduced, reprinted or distributed without the written permission of the publisher.