The Twentieth-Century World and Beyond An International History since 1900 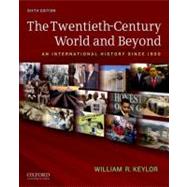 The Twentieth-Century World and Beyond: An International History since 1900explores the history of modern relations between the U.S., Europe, Africa, Asia, Latin America, and the Middle East. The book's unique analytical framework--which focuses on the relationships between and among countries rather than on individual histories--helps students easily examine how the nations of the world have interacted since the beginning of the last century.The Twentieth-Century World and Beyond, Sixth Edition, is ideal for undergraduate and graduate courses in twentieth-century world history, and courses in international relations and international studies. New to this Edition * Reflects the latest scholarship, addressing such issues as refugees and stateless persons, human rights, the environment, the war on terrorism, military action in Iraq, and the causes and consequences of globalization * Significantly more photos and maps * More material on the non-Western world: Africa, the Middle East, and Asia * An expanded discussion of NGOs, nuclear proliferation, environmental issues, human rights, and global warming * An improved design, with the narrative organized into more manageable units

William R. Keylor is Professor of International Relations and History at Boston University.