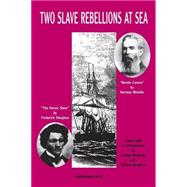 Fredrick Douglass (1818-1895), a fugitive slave who became the best-known black abolitionist orator and autobiographer, and Herman Melville (1819-1891), a fiction writer recognized for the elusiveness of his meanings, both composed stories about slave revolts at sea. In the decade just before the Civil War, during years of increasingly angry debate about slavery, Douglass in "The Heroic Slave" (1853) and Melville in "Benito Cereno" (1855) fictionalized important slave insurrections. Of the mutiny on the Creole, on which Douglass's story is based, the editors recount what can be recovered about the slave Madison Washington, who led the revolt, and reconstruct the events before and after the uprising. The editors warn the readers that the official documents about the case are all biased against the mutineers, who were never allowed to tell their story to American officials. Addressing largely white readers in the North, Douglass, to the contrary, speaks clearly as an abolitionist: Slaves wanted their freedom and were justified in using violence to gain it. "Benito Cereno" is based on Captain Amasa Delano's chapter in his Narrative of Voyages and Travels... (1817) about a slave mutiny off the coast of South America. Writing in part for a northern readership, Melville tells of a mutiny that, unlike Madison Washington's, was suppressed. Delano's account shows no sympathy for the slaves. Melville's view is hidden in ambiguities. "Benito Cereno" is one of Melville's stories most often collected in anthologies; Douglas's "The Heroic Slave" is rarely reprinted.

George Hendrick and Willene Hendrick are the authors of Two Slave Rebellions at Sea: "The Heroic Slave" by Frederick Douglass and "Benito Cereno" by Herman Melville, published by Wiley.