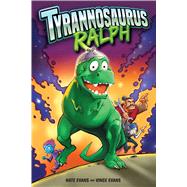 Dinosaurs plus bullies plus aliens plus hijinks equal a wacky new graphic novel kids will love!

Ralph is just trying to get home from school without getting picked on by the local bully.

He's not trying to run smack into that bully. He's also not trying to wake up hours later in the body of a Tyrannosaurus Rex. And he's DEFINITELY not trying to do battle in an alien arena in order to save Earth from the evil Cloberus Crunch.

Unfortunately for Ralph, this is exactly what happens.

Armed only with a new body (with very tiny arms) and his wits, Ralph is expected to not only defend himself and his planet in hand-to-hand combat with ferocious aliens, he must also navigate a new world filled with all sorts of creatures Ralph has never imagined, in which it can be difficult to tell friend from foe.

This zany, hilarious story will appeal to anyone who loves dinosaurs, aliens, and adventure.
Nate Evans has illustrated over 35 kids' books, and written a few more. Nate also co-authored several picture books with Laura Numeroff including "Ponyella," and the "Jellybeans" book series. "Ponyella" and two of the "Jellybeans" books appeared on the New York Times Bestseller list. Visit www.nateevans.com.

Vince Evans is a comic book artist who has done work for Marvel and others. Visit www.vinceevansart.com.
What is included with this book?