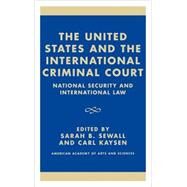 A growing international consensus supports the idea of holding individuals responsible for the most egregious violations of human rights such as genocide. This consensus lies behind the recent efforts to create an International Criminal Court (ICC). The United States, however, has refused to support the ICC, citing concerns that the Court may pose a threat to national security. This volume brings legal, historical, military, and political perspectives to an examination of U.S. concerns about the ICC. The contributors assess not only the potential national security risks that would be associated with a functioning ICC, but also the potential costs to U.S. security that may result from opposing the Court's creation.
What is included with this book?