Utopian Movements and Ideas of the Great Depression Dreamers, Believers, and Madmen 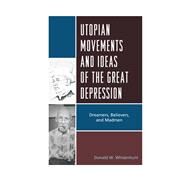 In the 1930s, the United States was beset with an economic crisis more serious than anything that could have been imagined. It was so serious that it might even threaten the future of the nation. On the national level, all sorts of reforms and experiments were initiated and developed by the New Deal of Franklin Roosevelt. Some people looking for change believed Roosevelt was going in the wrong direction. Others believed he was too timid in his reforms. Still others believed he had not broken free of the restraints placed on him by the financial interests of the country.Utopian Movements and Ideas of the Great Depression explores several lesser known movements for change and reform in the Great Depression Era of the 1930s. It includes studies of a few communal societies, proposals for reform, and analyses of several books written in the 1930s that propose solutions to the nation's economic ills. Arguably, America has been a Utopian experiment from its beginning; these movements and ideas of the 1930s were the latest manifestation of that experiment to that time. Though not well known, the people and events studied represent the thinking of some af the most articulate and driven Americans during the economic crisis. Despite their lack of obvious success, they represent an important American idea- that an average person could devise solutions to society's problems. They embody the American belief in progress and the power of the individual.
What is included with this book?