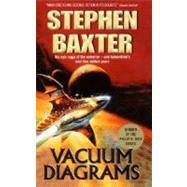 The winner of the 2000 Philip K. Dick Award tells the story of humankind--all the way to the end of the Universe. In vivid narratives spanning five million years are the first Poole wormholes spanning the solar system; the conquest of Human planets by Squeem; GUTships that outrace light; and the mystery and legacy of the Xeelee.
Vacuum Diagrams

It was, I saw, the morning of mankind, two thousand years before my own birth.

"It's difficult now to recapture the mood of those times,' Eve said. "Confidence-arrogance . . ."

Earth was restored. Great macroengineering projects, supplemented by the nanoengineering of the atmosphere and lithosphere and the transfer off-planet of most power-generating and industrial concerns, had stabilized and preserved the planet's fragile ecosystem. There was more woodland covering the temperate regions than at any time since the last glaciation, locking in much of the excess carbon dioxide which had plagued previous centuries. And the great decline in species suffered after the industrialization of previous millennia was reversed, thanks to the use of genetic archives and careful reconstruction-from disparate descendants-of lost genotypes.

Earth was the first planet to be terraformed

Meanwhile the Solar System was opened up.

Based in the orbit of Jupiter, an engineer called Michael Poole industriously took natural microscopic wormholes-flaws in spacetime-and expanded them, making transit links big enough to permit spaceships to pass through.

Poole Interfaces were towed out of Jovian orbit and set up all over the System. The wormholes which connected the Interfaces enabled the inner System to be traversed in a matter of hours, rather than months. The Jovian system became a hub for interplanetary commerce.

And Port Sol--a Kuiper ice-object on the rim of the System-was to be established as the base for the first great interstellar voyages ...

At the instant of his birth, a hundred impressions cascaded over him. His body, still moist from budding, was a heavy, powerful mass. He stretched, and his limbs extended with soft sucking noises. He felt blood-thick with mechanical potency-surge through the capillaries lacing his torso.

And he had eyes.

There were people all around him, crowding, arguing, hurrying. They seemed tense, worried; but he quickly forgot the thought. It was too glorious to be alive! He stretched up his new limbs. He wanted to embrace all of these people, his friends, his family; he wanted to share with them his vigor, his anticipation of his life to come.

Now a cage of jointed limbs settled around him, protecting him from the crush. He stared up, recognized the fast-healing wound of a recent budding. He called out-but his speech membrane was still moist, and the sound he made was indecipherable. He tried again, feeling the membrane stiffen. "You are my father," he said.

"Yes." A huge face lowered towards him. He reached up to stroke the stem visage. The flesh was hardening. He felt a sweet pang of sadness. Was his father already so old, so near to Consolidation?

Sculptor 472. "Thank you," he said seriously. "But-" But what did "Sculptor" mean? He searched his mind, the memory set he'd been born with. Limbs. Father. People. Consolidation. The Sun; the Hills. There was no referent for "Sculptor." He felt a stab of fear; his limbs thrashed. Was something wrong with him?

"Calm yourself," his father said evenly. "It is a name preserved from the past, referring to nothing."

Sculptor 472. It was a good name; a noble name. He looked ahead to his life: his brief three-day morning of awareness and mobility, when he would talk, fight, love, bear his own buds; and then the long, slow, comfortable afternoon of Consolidation. "I feel happy to be alive, father. Everything is wonderful. I-"

He stopped, confused; his father's tone was savage, insistent.

Sculptor 472 wrapped his limbs around his torso. "Is it me?"

"No, child. The world is troubled."

"We had to leave the Hills." There was shame in 471's voice now; again Sculptor became aware of the crush of people beyond the cage of his father's strong limbs. "The Hills are damaged. There are--Sun-people--strange forms, glowing, shining. We dare not go there. We had to flee."

"But how will I Consolidate? Where will I go?"

"I'm sorry," his father said. "We must travel far. Perhaps we will find new Hills, where we can Consolidate. Perhaps before your time is due."

"But what about you?"

Sculptor unwrapped his limbs, settled them to the ground and stood, experimentally. He felt a little dizzy, and some of his joints ached. "Yes. Yes, I'm fine. But I must know--"

His father rolled away from him and surged stiffly after the fleeing people.

Without 471's protective cage of limbs Sculptor was left exposed. The land here was bare, flat; the sky overhead was black and empty. He blinked away false memories of shaded Hills, of laughter and love.

His people surged to the horizon, abandoning him.

Awkwardly, stumbling as he learned to ripple his eight limbs across the uneven ground, Sculptor hurried after his father. Michael Poole joined the flitter in Lunar orbit. He was met by Bill Dzik, the Baked Alaska project director. Dzik was a burly, breathless man, his face rendered unnaturally smooth by Anti-Senescence treatment; he carried a small briefcase. His hand, plump and warm, engulfed Poole's. "Mike. Thanks for meeting me."

"I wasn't expecting to see you here personally, Bill."

Dzik tried to smile; his mouth was lost in the bulk of his face. 'Well, we have a problem. I'm sorry."

Poole stifled a sigh; a knot of tension settled in his stomach.

He followed Dzik into the flitter. The little ship was empty save for the pilot, a crop-haired woman who nodded briskly to Poole. Through the flitter's curving windows Poole saw Luna's ancient light, and the baby-blue tetrahedron that was the Interface to the wormhole to Baked Alaska. Poole and Dzik strapped themselves into adjacent seats, and with a ghost's touch of acceleration the flitter surged forwards. Poole watched the approach of the hundredyard-wide Interface; planes of silver-gold, fugitive, elusive, shone over the blue framework...

Excerpted from Vacuum Diagrams by Stephen Baxter
All rights reserved by the original copyright owners. Excerpts are provided for display purposes only and may not be reproduced, reprinted or distributed without the written permission of the publisher.