The Value of Living Well 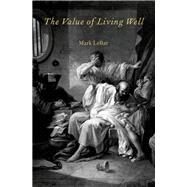 Since the middle of the twentieth century, virtue ethics has enriched the range of philosophical approaches to normative ethics, often drawing on the work of the ancient Greeks, who offered accounts of the virtues that have become part of contemporary philosophical ethics. But these virtue ethical theories were situated within a more general picture of human practical rationality, one which maintained that to understand virtue we must appeal to what would make our lives go well. This feature of ethical theorizing has not become part of philosophical ethics, although the virtue theories dependent upon it have. This book is an attempt to bring eudaimonism into dialogue with contemporary philosophical work in ethical theory. It does not attempt to replicate the many contributions to normative ethics, in particular to thinking about the virtues. Instead, it attempts to contribute to metatethics - to thinking about what we are doing when we think about normative ethics. In particular, it attempts to contribute to contemporary philosophical debate on the nature of what is good for us, on what we have most reason to do, on what facts about both those ideas consist in, on the nature of values and value facts, and the nature of the reasons for respect for others we might have. Its aim is to mark off space in these debates where a way of thinking about ourselves and our agential, practical, natures as the ancients did can enrich our thinking about those deep and important questions. In this way the book makes a case for what we might call Virtue Eudaimonism.

Mark LeBar is Associate Professor of Philosophy at Ohio University.
What is included with this book?