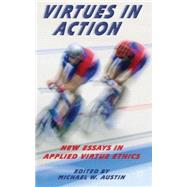 In recent decades, many philosophers have considered the strengths and weaknesses of a virtue-centered approach to moral theory. Much less attention has been given to how such an approach bears on issues in applied ethics. The essays in this volume apply a virtue-centered perspective to a variety of contemporary moral issues, and in so doing offer a fresh and illuminating perspective. Some of the essays focus on a particular virtue and its application to one or more realms of applied ethics, such as temperance and sex or humility and environmental ethics. Other chapters focus on an issue in applied ethics and bring several virtues into a discussion of that issue or realm of life, such as sport, education, and business. Finally, several of the chapters engage relevant psychological research as well as current neuroscience, which enhances the strength of the philosophical arguments.

Michael W. Austin is Professor of Philosophy at Eastern Kentucky University, specializing in ethics and philosophy of religion. He has authored Conceptions of Parenthood (2007), and edited or co-edited several works, including Being Good (2012) and The Philosophy of the Olympics (2012). His blog, Ethics for Everyone, can be found at http://www.psychologytoday.com/blog/ethics-everyone
Notes on Contributors
Introduction
PART I: PROFESSIONAL VIRTUE
1. Virtue-Centered Approaches to Education: Prospects and Pitfalls; Gregory Bassham
2. The Virtues of Honorable Business Executives; Dan Demetriou
3. Sport as a Moral Practice: An Aristotelian Approach; Michael W. Austin
PART II: SOCIAL VIRTUE
4. Sex, Temperance, and Virtue; Stan van Hooft
5. Extend Your Benevolence: Kindness and Generosity in the Family and Beyond; Heidi Giebel
6. A Virtue Ethical Case for Pacifism; Franco V. Trivigno
7. Some Critical Reflections on Abortion and Virtue Theory; Matthew Flannagan
PART III: ENVIRONMENTAL VIRTUE
8. Environmental Degradation, Environmental Justice, and the Compassionate Agent; Chris Frakes
9. Humility and Environmental Virtue Ethics; Matthew Pianalto
PART IV: INTELLECTUAL VIRTUE
10. Hope as an Intellectual Virtue; Nancy E. Snow
11. Virtue Ethics and Moral Failure: Lessons from Neuroscientific Moral Psychology; Lisa Tessman
12. Getting Our Minds Out of the Gutter: Fallacies that Foul Our Discourse (and Virtues that Clean it Up); Robert K. Garcia and Nathan L. King
Bibliography
Index
What is included with this book?