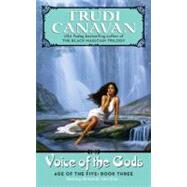 Unable to avoid being drawn into the terrible conflict, Auraya, now protector of the Siyee, fears she will be unable to meet the conditions of the all-powerful gods she once served. And an offer from a mysterious woman may be impossible for Auraya to refuse, but, if revealed, would brand her an enemy of the gods. Now, the immortal Wilds will not be deterred in their quest for powerful, long-buried secrets. But they have deadly adversaries who also seek the world-shattering truth . . . and it may appear in a form that no one anticipates.
Voice of the Gods
Age of the Five Trilogy Book 3

The constant rush of cascading water echoed between the walls. As Emerahl moved further down the tunnel the noise diminished, but so did the light. She drew a little magic and created a spark, then sent it forward to the end of the tunnel and beyond.

Everything was as she had left it: the rough beds in the center of the cave, made of logs lashed together and tough strips of bark woven into a tight net; the stone bowls Mirar had carved while stuck here last summer, waiting until he could master the skill of hiding his mind from the gods; the jars, boxes and bags of dried or preserved food and cures stacked against one wall, gathered over the months they had lived here.

Only one essential part of the cave could not be seen. Moving forward slowly, she felt the magic that imbued the world about her diminish to nothing and she smiled with satisfaction. Keeping her light burning with the magic she had gathered within herself, she continued to the center of the room, where magic once more surrounded her. She was within the void.

Sighing, she sat down on one of the beds. When she had returned here last spring, she had noted that the space devoid of magic had shrunk since her last visit over a century ago. Slowly the magic of the world was seeping back to fill it. That suggested the original void had been even larger before she'd discovered it, and would eventually no longer exist.

For now it would suffice. She had travelled through the rough wild land of Si, a journey which involved a lot more climbing than walking, in order to reach this place. At every second step she had cursed Mirar, her fellow immortal and friend, for talking her into teaching Auraya. Every other step she had cursed The Twins, immortals even more ancient than herself and Mirar, who she had finally met for the first time a few months ago, for agreeing with him.

:We must know what Auraya is, Tamun had said to her in a dream-link, the night after Mirar had made his request. If she becomes an immortal she could also become a valuable ally.

:She must still be a powerful sorceress, Surim had replied with uncharacteristic seriousness. Remember, the gods do not like independent sorcerers any more than they like us immortals. If we do not help her they will kill her.

:Will they? Just because she has quit the White doesn't mean she has turned against them, Emerahl had pointed out. Auraya is still a priestess. She still serves the gods.

:Her mind is full of doubts, Tamun said. The gods' demand that she kill Mirar without trial weakened her regard for them.

Emerahl nodded. She knew this herself. Once Auraya had removed the ring of the gods' power her mind had no longer been shielded. With help from The Twins, Emerahl had learned to mind-skim and had occasionally seen Auraya's thoughts.

The trouble is, while Auraya's loyalty toward some gods has been weakened she still feels a need to at least remain on good terms with them. If she discovers who I am, she will know the gods want me dead. And she doesn't have a prior friendship with me to make her reluctant to strike, as she had with Mirar.

She had seen enough of Auraya's mind to know the former White did not like killing. If their meeting went well the gods wouldn't even know Emerahl was here. She looked around the room again. The gods were beings of magic, and so could only exist where there was magic. They could not enter these rare, unexplained voids, nor could they see what lay within unless they looked through the eyes of humans standing outside it. Once Auraya was here the gods would not be able to read her mind.

There was still a good chance Emerahl had travelled halfway across the continent for nothing. She could not make Auraya learn anything. She would have to be careful what she told the woman, too. If Auraya left the void before learning to hide her thoughts, the gods would read her mind.

Emerahl shook her head and sighed again. This is such a risk. It's all very well for The Twins, safely hidden away in the Red Caves in distant Sennon, or Mirar in Southern Ithania. They don't have to worry that Auraya will change her mind and decide killing immortals without due cause is acceptable.

But The Twins' help was invaluable. Every day and night they reached out to minds across the continents, skimming thoughts, alert to the intentions and actions of powerful people. The pair had honed these skills over thousands of years. They knew mortals so well, they could predict their behavior with uncanny accuracy.

Mirar had always said that the Wilds—or Immortals, as The Twins called them—each had an innate Gift. Emerahl's was her ability to change her age, Mirar's was his unsurpassed ability to heal. The Twins' was mind-skimming. The Gull's . . . she wasn't sure exactly what his was, but she was sure it had something to do with the sea.

And Auraya's, Mirar claimed, was her ability to fly. Emerahl felt a twinge of interest ease her annoyance at being here. I wonder if she can teach it to others. Mirar taught me to heal, though I can't do it as well as he can. Perhaps I won't be able to fly as well as she can . . . actually, flying doesn't sound like an ability one can safely do less well at. Ineptitude could be fatal.

She snorted then. It's worth a try, though. There has to be some benefit in this for me. It would be easier to like the idea of teaching this girl if I'm compensated for having to put off my search for the Scroll of the Gods.

Voice of the Gods
Age of the Five Trilogy Book 3. Copyright © by Trudi Canavan. Reprinted by permission of HarperCollins Publishers, Inc. All rights reserved. Available now wherever books are sold.

Excerpted from Voice of the Gods by Trudi Canavan
All rights reserved by the original copyright owners. Excerpts are provided for display purposes only and may not be reproduced, reprinted or distributed without the written permission of the publisher.