The War on Terror and the Growth of Executive Power? 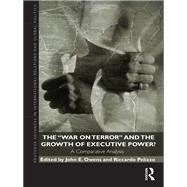 The 9/11 attacks on New York and Washington prompted a "global war on terror" that led to a significant shift in the balance of executive-legislative power in the United States towards the executive at the expense of the Congress.In this volume, seasoned scholars examine the extent to which terrorist threats and counter-terrorism policies led uniformly to the growth of executive or Government power at the expense of legislatures and parliaments in other political systems, including those of Australia, Britain, Canada, Indonesia, Israel, Italy, and Russia. The contributors question whether the "crises" created by 9/11 and subsequent attacks, led inexorably to executive strengthening at the expense of legislatures and parliaments. The research reported finds that democratic forces served to mitigate changes to the balance of legislative and executive power to varying degrees in different political systems.This book will be of interest to students and researchers of Comparative Government Politics and International Politics.