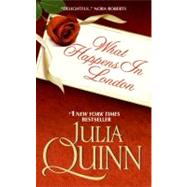 Rumors and Gossip . . . The lifeblood of LondonWhen Olivia Bevelstoke is told that her new neighbor may have killed his fiancÉe, she doesn't believe it for a second, but, still, how can she help spying on him, just to be sure? So she stakes out a spot near her bedroom window, cleverly concealed by curtains, watches, and waits . . . and discovers a most intriguing man, who is definitely up to something.Sir Harry Valentine works for the boring branch of the War Office, translating documents vital to national security. He's not a spy, but he's had all the training, and when a gorgeous blonde begins to watch him from her window, he is instantly suspicious. But just when he decides that she's nothing more than an annoyingly nosy debutante, he discovers that she might be engaged to a foreign prince, who might be plotting against England. And when Harry is roped into spying on Olivia, he discovers that he might be falling for her himself . . .
What Happens in London

It was enough to make Lady Olivia Bevelstoke cease stirring her tea. "Who?" she asked, since the truth was, she hadn't been listening.

Olivia took a hard look at Anne Buxton, and then at Mary Cadogan, who was nodding her head in agreement. "You must be joking," she said, although she knew quite well that Anne would never joke about something like that. Gossip was her lifeblood.

"No, he really is your new neighbor," put in Philomena Waincliff.

Olivia took a sip of her tea, mostly so that she would have time to keep her face free of its desired expression, which was a cross between unabashed exasperation and disbelief. "I meant that she must be joking that he killed someone," she said, with more patience than she was generally given credit for.

"I know I heard that he killed his fiancÃ©e," Anne insisted.

"If he killed someone, he'd be in gaol," Olivia pointed out.

"Not if they couldn't prove it."

Olivia glanced slightly toward her left, where, through a thick stone wall, ten feet of fresh springtime air, and another thick wall, this one of brick, Sir Harry Valentine's newly leased home sat directly to the south of hers.

The other three girls followed her direction, which made Olivia feel quite foolish, as now they were all staring at a perfectly blank spot on the drawing-room wall. "He didn't kill anyone," she said firmly.

"How do you know?" Anne responded.

"Because he didn't," Olivia said. "He wouldn't be living one house away from me in Mayfair if he'd killed someone."

"Not if they couldn't prove it," Anne said again.

Olivia managed an ever-so-slight turn of her lips. Upward, she hoped. It wouldn't do to frown. It was four in the afternoon. The other girls had been visiting for an hour, chatting about this and that, gossiping (of course), and discussing their wardrobe selections for the next three social events. They met like this frequently, about once per week, and Olivia enjoyed their company, even if the conversation lacked the heft she enjoyed with her closest friend, Miranda nÃ©e Cheever now Bevelstoke.

Yes, Miranda had gone and married Olivia's brother. Which was a good thing. A marvelous thing. They had been friends since birth, and now they would be sisters until death. But it also meant that Miranda was no longer an unmarried lady, required to do unmarried lady sorts of things.

Unmarried Lady Sorts of Things
By Lady Olivia Bevelstoke, Unmarried Lady
Wear pastel colors
(and be quite glad if you possess the correct complexion for such hues).
Smile and keep your opinions to yourself
(with whatever success you are able).
Do what your parents tell you to do.
Accept the consequences when you don't.
Find a husband who won't bother to
tell you what to do.

It was not uncommon for Olivia to formulate such epigraphic oddities in her mind. Which might explain why she so frequently caught herself not listening when she ought.

And, perhaps, why she might have, once or twice, said things she really should have kept to herself. Although in all fairness, it had been two years since she'd called Sir Robert Kent an overgrown stoat, and frankly, that had been far more charitable than the other items on her mental accounting.

But digressions aside, Miranda now got to do married lady sorts of things, for which Olivia would like to have formed a list, except that no one (not even Miranda, and Olivia still had not forgiven her for this) would tell her what it was that married ladies did, aside from not having to wear pastel colors, not having to be accompanied by a chaperone at all times, and producing small infants at reasonable intervals.

Olivia was quite certain there was more to the last bit. That was the one that sent her mother fleeing from the room every time she asked.

But back to Miranda. She had produced a small infant—Olivia's darling niece Caroline, for whom she'd happily throw herself under hooves, equine or otherwise—and was now on her way to producing another, which meant that she was not available for regular afternoon chitchat. And as Olivia liked chitchat—and fashion and gossip—she found herself spending more and more time with Anne, Mary, and Philomena. And while they were often entertaining, and never malicious, they were, slightly more than occasionally, foolish.

"Who are they, anyway?" Olivia asked.

"They. The people who say my new neighbor killed his fiancÃ©e."

Anne paused. She looked at Mary. "Do you recall?"

"No," Philomena put in, shaking her head with great certitude. "It wasn't Sarah. She only got back from Bath two days ago. Libby Lockwood?"

"Not Libby," Anne said. "I would have remembered if it were Libby."

"That's my point," Olivia interjected. "You don't know who said it. None of us does."

"Well, I didn't make it up," Anne said, a touch defensively.

"I didn't say you did. I would never think that of you." It was true. Anne repeated most anything uttered in her presence, but she never made things up. Olivia paused, collecting her thoughts. "Don't you think it's the sort of rumor one might want to verify?"

This was met with three blank stares.

Olivia tried a different tactic. "If only for your own personal safety. If such a thing were true—"

"Then you think it is?" Anne asked, in a rather pinning—you-down sort of voice."No." Good heavens. "I don't. But if it were, then surely he would not be someone with whom we would wish to associate."

This was met with a long beat of silence, finally broken by Philomena: "My mother has already told me to avoid him."

"Which is why," Olivia continued, feeling a bit as if she were slogging through mud, "we should ascertain its accuracy. Because if it's not true—"

"He wears only black," Mary said, rather confidentially.

"I saw him in dark blue," Anne contradicted.

What Happens in London. Copyright Â© by Julia Quinn . Reprinted by permission of HarperCollins Publishers, Inc. All rights reserved. Available now wherever books are sold.

Excerpted from What Happens in London by Julia Quinn
All rights reserved by the original copyright owners. Excerpts are provided for display purposes only and may not be reproduced, reprinted or distributed without the written permission of the publisher.