When the Elephants Dance : A Novel 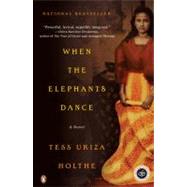 In the waning days of World War II, the Filipino people were caught between a brutal Japanese occupation and battling U.S. forces. In this compelling, incandescent novel, thirteen-year-old Alejandro Karangalan, his spirited older sister Isabelle, and Domingo, a passionate guerilla commander, narrate the story of the Karangalans-a family who huddle with their neighbors in the cellar of a house near Manila to wait out the war. In their crowded refuge, the group shares magical stories of Filipino myth and legend. Spellbinding, with a dazzling array of ghosts, witches, supernatural creatures, and courageous Filipinos from history, these tales transport the listeners and give them new resolve to survive.
Tess Uriza Holthe grew up in a Filipino American family in San Francisco. When the Elephants Dance is inspired, in part, by the experiences of her father, who was a young boy in the Philippines during World War II.

Papa explains the war like this: "When the elephants dance, the chickens must be careful." The great beasts, as they circle one another, shaking the trees and trumpeting loudly, are the Amerikanos and the Japanese as they fight. And our Philippine Islands? We are the small chickens. I think of baby chicks I can hold in the palm of my hand, flapping wings that are not yet grown, and I am frightened.

Papa is sick. His malaria has returned double strong, and his face is the color of dishwater. He sweats in his sleep but shakes beneath the woven blankets. When he talks there is phlegm and a quaking in his voice that is hard to listen to. As eldest son, I have been given the duty of food trader for the day. I go in search of rice, beans, camotes, papaya, pineapple, canned tomatoes, Carnation milk, quinine for the malaria, anything I can find. Even the foul-smelling durian fruit with its spiked shell would be a blessing. Pork would be a miracle. We are all very thin like skeletons.

Since the Japanese chased the Amerikanos away three years ago, a kilo of rice now costs fifty centavos, more than four times the original price. The Japanese have created new money, but it is no good. We call it Mickey Mouse money. We trade for everything these days, work, food, medicine.

I carry my basket of cigarettes to barter with. I worked twelve evenings in Manila to earn these, serving coffee and whiskey to the families on Dewey Boulevard who have been allowed to remain in their mansions and villas. These families were the ones who stood in the streets and waved white flags for the Japanese Imperial Army when they first arrived. I would walk twenty kilometers south each day from our hometown of Santa Maria in Bulacan province to work these houses in Manila. I kept watch as the men smoked and played mah-jongg on the stone-and-marble verandas. Their tables faced Manila Bay, her violet sunsets, and the streets lined with coconut palms.

At the end of each evening, I would go to see the hostess, Dona Alfonsa, her face white like a geisha's from too much talcum. She sat in her spacious parlor beneath a row of matching ceiling fans. The blades were made of straw and shaped like spades. Each night she lifted opal-ringed fingers and counted three packs of Lucky Strikes. One for every four hours that I worked. She paid me in cigarettes, and I made certain the cups were always full.

My brother, Roderick, accompanies me in my search for food. He is two years younger, and today is his tenth birthday. We must be careful not to step on the dead, and the Japanese soldiers must be avoided at all costs. The first is Mama's request, the second, Papa's order.

"Pay attention." I grab Roderick by his shirt and point to a man lying facedown.

He frowns. "It is impossible. They are everywhere."

The stench is terrible in this heat. It rises like steam from a bowl of bad stew. I try to breathe through my mouth. Mrs. Del Rosario has been staring at the sky for three days. Her skin has rotted, and the animals have taken their share. Her robe is thrown open, and her right leg is pointed in a strange direction. I try not to look when we pass. Roderick becomes stuck to his spot. He was a favorite of hers.

He turns to me. His eyes are angry and red. He looks away.

The blue flies cover the bodies like death veils. They land on our faces, bringing kisses from the dead. We swat them away quickly.

Early this morning, before light, we heard the rumble of tanks and saw many Amerikano soldiers in green uniforms and heavy boots marching in the dark. Papa said that their destination would be the Paco railroad station, an area well guarded by the enemy.

Ever since General MacArthur's voice was heard on the radio saying that he has returned, all citizens have taken to hiding in their cellars. No one leaves their homes unless it is an emergency. It is best to stay hidden from the Japanese soldiers. Their tempers are short now that the Amerikanos have reappeared. They are quick to slap us on the face or grab a fistful of our hair. Everyone is under the suspicion of being for MacArthur.

There are barricades and checkpoints every two kilometers. At these spots the Japanese stand with bayonets and their special police, the Kempeitai. There are Filipinos who stand with them called Makapilis. It is short for Makabayang Pilipino, which means "our fellow countrymen." The Makapili are Japanese sympathizers. They are pro-Asian and do not want the Amerikanos to come back. The Makapilis help the Kempeitai hunt for guerrillas. Papa calls the Makapili cowards because they hide behind cloth masks. One finger from them and a Filipino can be sentenced to death. They will turn in their countrymen without hesitation. The Japanese have poisoned our minds against one another.

Amerikano bombers fly in a V shape above. We watch their silver underbellies, ripe with strength.

"This way," I tell my brother.

"Quiet," I tell him. We hurry, crouching low to the ground, ready to dive. The ground shakes and the sky rumbles from their passing. My head spins from our quick movements. I steady myself against a tree. Roderick is the same way. We have grown much weaker in the last month from lack of food. There is no food to be found. Any supply trucks are ambushed by the guerrillas. It was better when we had the cow; at least we had milk. Papa worked so hard not to slaughter her, only to have someone steal her when we slept.

"We must not move so fast. Stay close," I tell Roderick.

"Papa said to stay away from the city," he protests.

"I know." I keep moving, and he follows as always.

We walk south toward Manila.

"Papa told us not to go toward the city." Roderick catches up to me. He pulls my arm in frustration.

From behind comes the sound of tanks approaching. We stop arguing and jump into a banana grove. Five Amerikano tanks, followed by fifty soldiers on foot. We come out of our hiding place. A few of the soldiers look our way.

"And carbines," Roderick adds, shooting the trees with imaginary bullets. "But where are the big guns that have been shaking our house?"

Roderick stares at me.

My stomach twists from hunger. Already my brow is dripping with sweat from the heat, and the dust is caught in my throat. I take my palm and swipe it across my eyes. "We have to find food. Papa's sickness is getting worse. Do you want to go back? Why don't you go back." I leave him standing with his arms crossed.

He follows. "Why do they not bury her?"

"Who?" I ask, looking at the scattered bodies. It is difficult to see whom the faces once belonged to.

"I hope someone buries me," Roderick says.

I look at my brother. "Do not say that. Make the sign of the cross." He does so. His blue shirt is too large. The collar falls over his shoulder, and I can see his skin stretched over the bones.

"Alejandro?" He holds my gaze.

"Will that happen to us?"