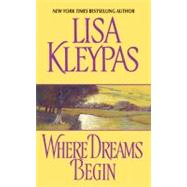 Zachary Bronson has built an empire of wealth and power -- now he needed a wife to help secure his position in society...and warm his bed in private.But not just any woman will do for a man whom all of London knows is not a gentleman. Then he unexpectedly swept Lady Holly Taylor into his arms for an unasked for -- but very alluring -- kiss, and suddenly he knew he had found a woman whose fierce passions matched his own.Lady Holly Taylor was beautiful, generous, and, as a widow, destined to spend her life playing by society's rules, even when they went against her bolder instincts. But Zachary's kiss had aroused her, and though the shocking offer he made didn't include marriage, she was compelled to risk everything and follow him to the place where dreams begin.
Where Dreams Begin

She had to escape.

The rumble of sophisticated chatter, the blaze of chandeliers that splashed hot wax onto the dancers below and the profusion of smells that heralded the lavish supper to come, all overwhelmed Lady Holly Taylor. It had been a mistake to attend a grand social event so soon after George's death. Of course, most people would not consider three years to be "soon." She had gone through the year and a day of Deep Mourning, barely venturing from the house except to take garden walks with her small daughter Rose. She had worn black bombazine and covered her hair and face with veils that symbolized her separation from her husband and the unseen world. She had taken most of her meals alone, covered all mirrors in the house with black crepe and written letters on black-banded paper, so that every interaction with the outside world would bear the sips of her grief.

Second Mourning had come next. She had still worn all-black clothing, but had relinquished the protective veil. Then, on the third year after George's death, Holly had undergone Half Mourning, which had allowed her to wear gray or mauve, and to participate in small, inconspicuous women's activities, such as tea with relatives or close female friends.

Now that all stages of mourning were finished, Holly had emerged from the dark and comforting shelter of the grieving period into a bright social world that had become terribly unfamiliar. True, the faces and the scene were exactly as she remembered ... except that George was no longer with her. She felt conspicuous in her aloneness, uncomfortable in her new identity as the Widow Taylor. Like everyone else, she had always regarded widows as somber figures to be pitied, women who wore an invisible mantle of tragedy no matter what their outward attire suggested. Now she understood why so many widows who attended events like this always looked as though they wished they were somewhere else. People approached her with sympathetic expressions, offered a small cup of punch or a few consoling words and left with a discreet air of relief, as if a social duty had been performed and they were now free to enjoy the ball. She herself had done the same thing to widows in the past, wanting to be kind and yet reluctant to be affected by the desolation in their eyes.

Somehow it had not occurred to Holly that she would feel so isolated in the midst of a large gathering. The empty space beside her, where George should have been, seemed like a painfully obvious gap. Unexpectedly, a feeling akin to embarrassment came over her, as if she had stumbled into a place where she did not belong. She was half of something that had once been whole. Her presence at the ball only served as a reminder that a dearly loved man had been lost.

Her face felt stiff and cold as she inched her way along the wall toward the door of the drawing room. The sweet riot of melody the musicians played did not cheer her, as her friends bad hopefully suggested. The music only seemed to mock her.

Once Holly had danced as lightly and swiftly as the other young women here tonight, feeling as if she were flying in George's protective arms. They had been made for each other, and people had once commented with admiring smiles. She and George had been similar in size, with her own diminutive stature matched by her husband's less-than-towering frame. Although George had been average in height, be had been wonderfully fit, and so very handsome with his golden brown hair and alert blue eyes, and a dazzling smile that was never long in hiding. He had loved to laugh, dance, talk ... no ball or crush or dinner party had ever been complete without him.

Oh, George. A wet aching pressure grew behind her eyes. How lucky I was to have you. How lucky we all were. But how am I supposed to go on without you?

Well-meaning friends had pressured her to come here tonight, intending that this should begin the days of freedom from the smothering rituals of mourning. But she wasn't ready...not tonight...perhaps not ever.

Her gaze scored across the crowd, locating various members of George's family as they socialized and ate delicacies from gilded Sevres porcelain plates. His older brother, William, Lord Taylor, was escorting his wife to the drawing room, where a quadrille was about to begin. Lord and Lady Taylor were a well-suited couple, but their tepid affection did not begin to approach the genuine love that she and George had shared. It seemed that everyone in George's family -- his parents, his brothers, and their wives -- had finally recovered from his death. Enough that they could take part in a ball, laugh and eat and drink, allow themselves to forget that the most beloved member of the family was in an early grave. Holly did not blame them for their ability to carry on, now that George was gone...in fact, she envied them. How wonderful it would be to escape the invisible mantle of grief that covered her from head to toe. If not for her daughter Rose, she would never have a moment's respite from the constant ache of loss.

"Holland," came a murmur from nearby, and she turned to see George's youngest brother, Thomas. Although Thomas had the same attractive features, blue eyes and amber-streaked hair that all the Taylor men shared, he lacked the mischievous spark, the slow dazzling smile, the warmth and confidence that had made George so irresistible. Thomas was a taller, more somber version of his charismatic brother. He had been a steady source of support ever since George's death from typhoid fever.

"Thomas," Holly said brightly, forcing a smile to her stiff lips, "are you enjoying the ball?"

"Not especially," he replied, while sympathy flickered in the azure depths of his eyes. "But I believe I'm navigating it better than you, my dear. There's a pinched look on your face, as though one of your megrims is starting."

Where Dreams Begin. Copyright © by Lisa Kleypas. Reprinted by permission of HarperCollins Publishers, Inc. All rights reserved. Available now wherever books are sold.

Excerpted from Where Dreams Begin by Lisa Kleypas
All rights reserved by the original copyright owners. Excerpts are provided for display purposes only and may not be reproduced, reprinted or distributed without the written permission of the publisher.