Who Speaks for Plato? Studies in Platonic Anonymity 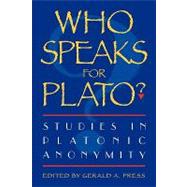 In this international and interdisciplinary collection of critical essays, a host of distinguished contributors examine a crucial premise of traditional readings of Plato's dialogues: that Plato's own philosophical dialogues and arguments can be read off the statements made in the dialogues by Socrates and other leading characters. The authors argue in general and in specific dialogues that no character should be taken to be Plato's mouthpiece. This is essential reading for students and scholars of Plato.
What is included with this book?