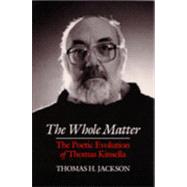 This is the first comprehensive study of the works of one of Ireland's most significant contemporary poets. Thomas Kinsella, who first became well known in Ireland in the 1950s, now ranks among the most important of his generation of Irish poets. Although he is considered by many to be the most serious and the most experimental of the contemporary Irish poets, his work has received little critical attention.
Thomas Jackson rectifies this with his thorough and highly accessible discussion of this fine poet's work, from his lyrical, formally structured early pieces (including Another September and Downstream) to his later work, dense, difficult, brooding (Nightwalker and Peppercanister Poems).
Kinsella's later work is considered by many to have brought the techniques of international Modernism to Irish verse. Jackson is a perfect guide to the later poems, an art that engages, analyzes, and morally restructures the content of the poet's world. What emerges in The Whole Matter is a picture of a far-reaching poetic development immersed in the culture around it and with the entire human situation.
Thomas H. Jackson is Professor of English at Bryn Mawr College.