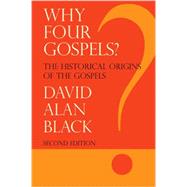 In Why Four Gospels? noted Greek and New Testament scholar David Alan Black, concisely and clearly presents the case for the early development of the gospels, beginning with Matthew, rather than Mark. But this is much more than a discussion of the order in which the gospels were written. Using both internal data from the gospels themselves and an exhaustive and careful examination of the statements of the early church fathers, Dr. Black places each gospel in the context of the early development of Christianity. Though Markan priority is the dominant position still in Biblical scholarship, Dr. Black argues that this position is not based on the best evidence available, that the internal evidence is often given more weight than it deserves and alternative explanations are dismissed or ignored. If you would like an outline of the basis for accepting both early authorship of the gospels and the priority of Matthew, this book is for you.