Wigfield The Can-Do Town That Just May Not 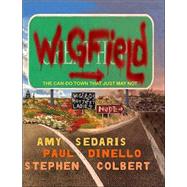 igfield is a town in danger. Built directly in front of a massive dam, this bucolic hideaway will soon be flooded when the dam is torn down by the state government to restore the salmon run. Wigfield's only hope lies in the self-righteous, self-aggrandizing, self-involved 'journalist' Russell Hokes, who arrives hoping to capture the quiet dignity of the disappearing American Small Town. However, Wigfield is neither quiet nor dignified. And as the date of Wigfield's destruction draws nearer, Hokes casts about like a cork in a typhoon desperate to find something about Wigfield worth documenting-or saving. Told through interviews with its many colorful residents, and accompanied by photos of the authors in character, Wigfield is a razor-sharp satire by three major talents.
Amy Sedaris has appeared in several movies and television shows, and, with Paul Dinello and Stephen Colbert, is a co-author of the novel Wigfield. She also co-wrote Strangers with Candy, the hit show on Comedy Central. She lives in Manhattan.
What is included with this book?