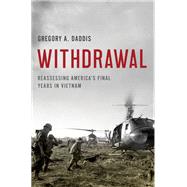 A "better war." Over the last two decades, this term has become synonymous with US strategy during the Vietnam War's final years. The narrative is enticingly simple, appealing to many audiences. After the disastrous results of the 1968 Tet offensive, in which Hanoi's forces demonstrated the
failures of American strategy, popular history tells of a new American military commander who emerged in South Vietnam and with inspired leadership and a new approach turned around a long stalemated conflict. In fact, so successful was General Creighton Abrams in commanding US forces that, according
to the "better war" myth, the United States had actually achieved victory by mid-1970. A new general with a new strategy had delivered, only to see his victory abandoned by weak-kneed politicians in Washington, DC who turned their backs on the US armed forces and their South Vietnamese allies.

In a bold new interpretation of America's final years in Vietnam, acclaimed historian Gregory A. Daddis disproves these longstanding myths. Withdrawal is a groundbreaking reassessment that tells a far different story of the Vietnam War. Daddis convincingly argues that the entire US effort in South
Vietnam was incapable of reversing the downward trends of a complicated Vietnamese conflict that by 1968 had turned into a political-military stalemate. Despite a new articulation of strategy, Abrams's approach could not materially alter a war no longer vital to US national security or global
dominance. Once the Nixon White House made the political decision to withdraw from Southeast Asia, Abrams's military strategy was unable to change either the course or outcome of a decades' long Vietnamese civil war.

In a riveting sequel to his celebrated Westmoreland's War, Daddis demonstrates he is one of the nation's leading scholars on the Vietnam War. Withdrawal will be a standard work for years to come.

Gregory Daddis is Associate Professor of history and director of Chapman University's MA Program in War and Society. A retired US Army colonel, he has served in both Operations Desert Storm and Iraqi Freedom. Daddis specializes in the history of the Vietnam Wars and the Cold War era.

Introduction - The Limits of Strategy in a Stalemated War

Chapter 2 Vietnamization - Policy of Withdrawal or Strategy for Victory?

Chapter 3 Pacification without Peace - The Travails of Nation Building

Chapter 4 Balancing a War - Strategy, Diplomacy, and Withdrawal
Chapter 5 A New Army for an Old War?

Conclusion - Limited Wars, Societies, and the Problem of "Victory"