A Wizard of Earthsea 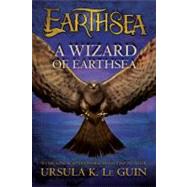 In the first volume of this legendary fantasy series originally published in 1968, a boy grows to manhood while attempting to subdue the evil he unleashed on the world as an apprentice to the Master Wizard. Ged was the greatest sorcerer in all Earthsea, but once he was called Sparrowhawk, a reckless youth, hungry for power and knowledge, who tampered with long-held secrets and loosed a terrible shadow upon the world. This is the tale of his testing, how he mastered the mighty words of power, tamed an ancient dragon, and crossed death's threshold to restore the balance.