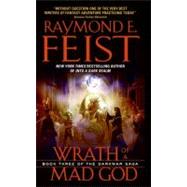 To save the future of both empires, the powerful sorcerer Pug and the Conclave of Shadows journey into the Dasati homeworld, in the thrilling conclusion to Feist's explosive Darkwar Trilogy.
What is included with this book?

Wrath of a Mad God
Book Three of the Darkwar Saga

The searing agony that seized her mind relented for the briefest moment, and in that instant she found what she had been seeking. The preponderance of her awareness was occupied with the battle of wills with her captors, but a tiny fragment—a disciplined fraction of her consciousness—had been readied. Over the days of interrogation and examination she had used every respite to partition off this one sliver of her intellect, to somehow overcome the blinding pain, and observe. During the last four encounters with the Dasati Deathpriests she had achieved that detachment and willed her body to withstand the pain. It was there, she knew, inflamed nerves protesting about the alien energies coursing across the surface of her mind, probing it, seeking insights into her very being, but she had learned to ignore physical pain centuries before. The mental assaults were more difficult, for they attacked the root of her power, the unique intelligence that made her a supreme magician on her home world.

These Dasati clerics lacked any pretense of subtlety. At first they had ripped open her thoughts like a bear pulling apart a tree stump looking for honey. A lesser mind would have been savaged beyond recovery on the first assault. After the third such onslaught, Miranda nearly had been reduced to idiocy. Still, she had fought back, and knowing there was no victory if there was no survival, she had focused all her considerable talents first on endurance, then insight.

Her ability to shunt aside the terrible assault and focus on that tiny sliver of knowledge she had gained kept her sane. Her determination to overcome her captivity and return with that knowledge gave her purpose.

Now she feigned unconsciousness, a new ploy in her struggle with her captors. Unless they possessed finer skills than she had so far encountered, her charade was undetected: to them she appeared incapacitated. This counterfeit lack of awareness was her first successful conjuration since her captivity began. She risked just enough body awareness to ensure that her breathing was slow and shallow, even though she suspected the Deathpriests who studied her still knew too little about humans to understand what physical signs to observe. No, her struggle was in the mind, and there she would eventually triumph. She had learned more about her captors than they had about her, she was certain.

Individually the Dasati were no match for her, nor even for one of her more advanced students back home. She had no doubt without the snare concocted by Leso Varen to disorient her, she would have easily disposed of the two Deathpriests who had seized her. But Varen was a force to reckon with, a necromancer with centuries of experience, and she alone would be hard-pressed to best him: three times one of his bodies had been killed to her knowledge, by multiple foes and taken by surprise, but still he survived. Between Varen and the Deathpriests, she had been quickly overwhelmed.

Now she knew the Deathpriests for what they were, necromancers of a sort. Throughout her life, Miranda had chosen to ignore clerical magic, as was common for most magicians on Midkemia, as being some sort of manifestation of the gods' powers. Now she regretted that oversight. Her husband, Pug, had been the only magician with whom she was familiar who had some insight into clerical magic, having made a point to learn as much about it as he could, despite the tendency of the various orders to be secretive. He had learned a great deal about this darkest of magic because of his repeated encounters with the Pantathian Serpent Priests, a death cult with their own mad ambitions. He had confronted several attempts on their part to wreak havoc throughout the world. She had listened indifferently to several discussions on the subject, and now she wished she had paid closer attention.

However, she was learning by the minute; the Deathpriests were clumsy and imprecise in their investigation and often revealed as much about their own magical nature as they learned about hers. Their lack of subtlety worked in her favor.

She heard her captor leave, but kept her eyes closed as she slowly let her consciousness return to the upper levels of her mind, every instant clinging to the insight she had just achieved. Then clarity returned. And with it, pain. She fought back the urge to cry out, and used deep breathing and mental discipline to manage the agony.

She lay up on a slab of stone, but stone that had its own evil nature, a sense of energy alien to Miranda. Simply touching it was uncomfortable, and she was strapped to it without benefit of clothing. She was drenched in perspiration and nauseous. Her muscles were threatening to cramp, and with her limbs restrained, the additional pain was unwelcome. She employed every trick at her disposal to control the urge, calm herself, and let the pain flow away.

For almost a week she had undergone the Dasati examination, enduring humiliation as well as pain, as they sought to learn as much about her and the human race as possible. She was secretly grateful for their heavy-handed approach for it provided her with two advantages: they had no experience with human guile and they vastly underestimated her.

She put aside her speculation on the Dasati, and turned her attention to escape. Once trapped by Leso Varen and the Deathpriests, she had quickly realized that her best course of action was to give her interrogators just enough truth to make credible everything said. Varen, his malignant consciousness currently inhabiting the body of the Tsurani magician Wyntakata, had not appeared since she had been taken, a fact for which she was grateful, as he would have given the Dasati a far greater advantage in dealing with her. She knew he had his own mad agenda and had only been in league with the Dasati for as long as it suited him, and cared nothing for the success of their insane ambitions, only for his own.

Wrath of a Mad God
Book Three of the Darkwar Saga. Copyright © by Raymond Feist. Reprinted by permission of HarperCollins Publishers, Inc. All rights reserved. Available now wherever books are sold.

Excerpted from Wrath of a Mad God by Raymond E. Feist
All rights reserved by the original copyright owners. Excerpts are provided for display purposes only and may not be reproduced, reprinted or distributed without the written permission of the publisher.