The Writings and Speeches of Edmund Burke Volume 1: The Early Writings 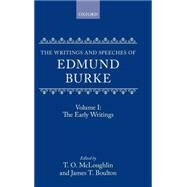 Volume 1 of the Writings and Speeches of Edmund Burke presents Burke's early literary writings up to 1765, and before he became a key political figure. It is the first fully annotated and critical edition, with comprehensive notes and an authoritative introduction. The writings published here introduce readers to Burke's early attempts at a public voice.
What is included with this book?