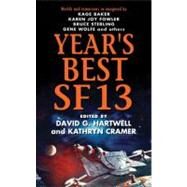 The thirteenth annual collection of the previous year's finest short-form sf is at hand. Once again, award-winning editors and anthologists David G. Hartwell and Kathryn Cramer have gathered together a stunning array of science fiction that spans a veritable universe of astonishing visions and bold ideas. Hitherto unexplored galaxies of the mind are courageously traversed by some of the most exciting new talents in the field-while well-established masters rocket to remarkable new heights of artistry and originality. The stars are closer and more breathtaking than ever before-and a miraculous future now rests in your hands-within the pages of Year's Best SF 13.
Year's Best SF 13

Translated from the Finnish by David Hackston

Johanna Sinisalo lives in the city of Tampere, in southern Finland, and is a contemporary Finnish SF and Fantasy writer. She is also a reviewer, columnist, comics writer, and screenwriter. She worked in advertising for fifteen years before turning to writing full time. Her first novel, published in the U.S. as Troll: A Love Story, was awarded Finland's most important literary prize. Her first collection came out in Finnish in 2005, Kädettömät kuninkaat ja muita häiritseviä tarinoita ["Handless Kings and Other Disturbing Stories"]. She has edited The Dedalus Book of Finnish Fantasy.

"Baby Doll," which appeared for the first time in English in 2007, in The SFWA European Hall of Fame, edited by James Morrow and Kathryn Morrow, was previously collected in the 2002 Finnish anthology Intohimosta rikokseen; it has also appeared in French, and in several other languages. It is a dark story which extrapolates on all-too-familiar social trends. Bruce Sterling singled out this story as one of the highlights of The SFWA European Hall of Fame, describing it as a "Finnish denunciation of materialistic exploitation of children." James Morrow calls it "a nightmare world of assembly-line Lolitas." Cutting-edge Finnish SF apparently has much to offer the world SF readership.

Annette comes home from school and shrugs her bag onto the floor in the hall. The bag is made of clear vinyl speckled with metal glitter, all in rainbow colors that swirl around the iridescent pink hearts and full kissy lips. The vinyl reveals the contents of the bag: Annette's schoolbooks, exercise books, and a plastic pencil box featuring the hottest boy band of 2015, Stick That Dick. The boys wear open leather jackets across their rippling bare torsos, and their jockstraps all feature the head of some animal with a large beak or a long trunk. Craig has an elephant on his jockstrap. Craig's the cutest of them all.

Annette slings her bright red spandex jacket across a chair and starts to remove her matching stretch boots. They're tight around the shins, but she can't be bothered to bend down and wrench them off. Instead she tries to pry one heel free with the opposite toe, but succeeds only in tearing her fishnet stockings."Oh, for fuck's sake!"

Mumps walks in from the kitchen, still wearing her work clothes. "What was that, darling?"

"Oh, dear, not again. And they were so expensive. Well, you'll just have to wear the plain ones tomorrow."

"Darling, you don't really have a choice."

"Then I'm not going to school at all!" Annette snatches up her bag and stomps off toward her room, but the TV is on in the den, and it's time for her favorite show, Suburban Heat and Hate. "I'd look like a total dork!" she continues, half to herself, half to her mother, who can no longer hear her, as she throws herself on the couch.

The show begins. The plot's as thick as it gets. Jake has just been discovered in bed with Melissa, but Bella doesn't know that Jake knows she's having an affair with his twin brother Tom. Jake meanwhile doesn't know that Melissa is in fact his daughter, because years ago he helped a lesbian couple get pregnant.

"Let's make a deal, darling." Mum has come in from the kitchen and is standing by the couch.

"Quiet! I can't hear a thing." Just then Bella pulls Jake off Melissa, screaming a barrage of abuse, leaving Melissa's enormous boobs and Jake's white butt in full view. At school today Annette heard Ninotska telling everyone to watch this afternoon's episode because Jake's got such a fantastic butt. Annette doesn't see what's so fantastic about it. It's paler than the rest of his brown skin, and it isn't as hairy as other men's butts. Still, tomorrow she'll find an opportunity to tell Ninotska she got a glimpse of Jake's butt, and of course she'll say she thought it was totally hypersmart, and give a low giggle the way you're supposed to when you talk about these things.

Mum waits till the commercials come on. "I have to go back to work the minute Dad gets home."

"Lulu's at a shoot. Dad'll pick her up around nine or ten, and then it's your bedtime."

"Tell me something I don't know."

"One more thing, darling. I'm going on a business trip tomorrow, and I'll be away for two days."

"You're always going off somewhere."

"Dad can help you with your homework."

"Yeah, right, I bet he makes me watch Otso so he can play squash."

"That's what I mean by the deal. Promise me you'll help Dad and all you kids will behave yourselves."

Annette is pissed off—big time. Whenever Mumps goes away, they end up eating all sorts of weird meals that Dumps cooks himself, instead of pizza or deli sushi or toasted sandwiches like Mumps gives them. You need to tell Dumps at least a hundred times what stuff to buy at the store, and why you need it. Once when Mumps was away Annette spent an hour explaining to Dumps why she categorically had to have a new eyelash-lengthening mascara and a bottle of golden body-spray.

"On one condition," Annette says.

"Can I go to a sleepover at Ninotska's Thursday night?"

Although Annette hasn't actually been invited, rumor has it Ninotska's still deciding on the final guest list. Annette has noticed Ninotska checking out the Stick That Dick pencil box that Mum and Dad brought back from London. Annette could give Ninotska the pencil box, then later ask Mum for money to buy another—she could always say she cracked the old one.

Just in case she gets invited, she has to make sure she has permission to go. If you get invited you have to be able to say "Sí, sí, gracias" without worrying about it. Nobody is tragic enough to say they need to ask permission, and if you say "Sí, sí, gracias" and don't turn up, you can pretty much forget about being invited anywhere again.

Excerpted from Year's Best SF 13 by David G. Hartwell, Kathryn Cramer
All rights reserved by the original copyright owners. Excerpts are provided for display purposes only and may not be reproduced, reprinted or distributed without the written permission of the publisher.